Photo: Sea train moving along the coastline of Donghae

The coastal cities of Gangneung, Donghae, and Samcheok in Gangwon-do offer a chance to ride the wonderful ocean-facing Sea Train, which runs along the coastline of the East Sea. The Sea Train presents unobstructed views as its windows are larger than those in standard trains. The region's well-known places like Jeongdongjin Beach, Mukho Port, and Samcheok Beach have a distinct impression when viewed from the train. The following column focuses on Jeongdongjin and Donghae, which are popular travel destinations for couples and families who come for the gorgeous sunrise and picturesque coastal village scenes. 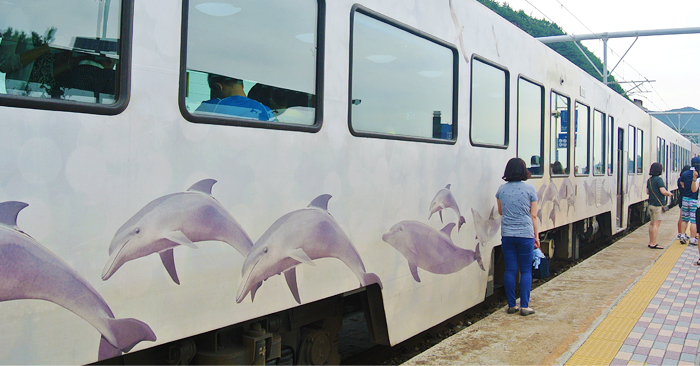 Photo: Seats in all compartments except family-seats face the large windows to the seaside

The Sea Train is composed of four cars: 2 first-class cars, 1 economy car, and 1 family car. The first and the second are first-class cars equipped with couple seats and all seats are window-facing. The third car has table seats designed for families, as well as regular train seats, and a cafeteria. The last car is mainly for accommodating group travelers with seats for two or three people. The train ride takes about 1 hour and 20 minutes for a one-way trip and 3 hours for a round trip.

Photo: Interior of the Sea Train adds a lively ambience with paintings of maritime creatures

In addition to the refreshing ocean views through the wide windows, the Sea Train interior has been decorated in an undersea motif with images of starfish, shellfish, and a trick art of a shark. Moreover, passengers will have no time to be bored as the train puts on motion sensing games and music that can be enjoyed through the monitors inside each compartment. Non-Korean speaking tourists can easily join in by following the motions of the passengers sitting around them, and might even receive a surprise gift from the DJ. Another noteworthy attraction is the display of green, red, and blue lights that illuminate the train interior whenever it passes through a tunnel, creating an offbeat atmosphere.

※ Trains may not operate on certain days of the month due to safety inspections.
※ Weekend morning train operates on weekends, public holidays, and specially disignated days. Please check the schedule from the official homepage in advance.

☞ Website: www.seatrain.co.kr (Korean only)
※ During the summer vacation season (July to August), the train is often fully-booked; we recommend making a reservation in advance through the Sea Train homepage.
☞ Inquiries: +82-33-573-5474 (Korean, Japanese)

* This column was last updated in September 2015, and therefore information may differ from what is presented here. We advise you to check details from the official websites before visiting.