SEOUL, Jan. 23 (Yonhap) -- The South Korean bobsleigh team of Won Yun-jong and Seo Young-woo captured the country's first-ever gold medal at the International Bobsleigh & Skeleton Federation (IBSF) World Cup on Friday in Canada, rising to the top spot in the international standings in the process.

In the fifth leg of the IBSF World Cup in Whistler, Canada, Won, the pilot, and Seo, his brakeman, finished their two runs in a combined time of 1:43.41, tied at the top with the Swiss team of Rico Peter and Thomas Amrhein.

Won and Seo also became the first Asians to reach the top of the IBSF World Cup podium.

With the gold, Won moved to the top of the World Cup standings with 1001 points. In four previous World Cup stops, Won and Seo had teamed up for three bronze medals and one sixth-place finish.

The emergence of the bobsleigh duo bodes well for South Korea's chances of snatching its first Olympic sledding medal on the home track at the 2018 PyeongChang Winter Games. 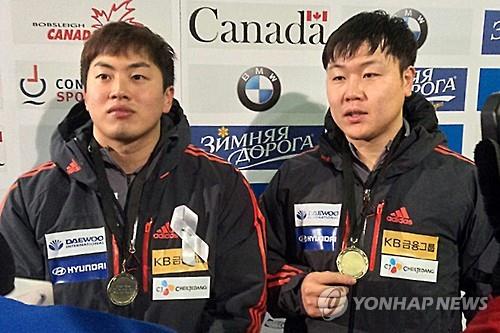 Won and Seo dedicated their historic victory to late national team coach Malcolm Lloyd, who passed away earlier this month before joining the South Koreans at the fourth World Cup stop in Lake Placid, New York.

"We are the ones that went out and competed, but there were so many others who put in the work to make it all possible," Won said. "I'd like to thank our coaching staff, trainers, video analyst, equipment manager, sponsors and national bobsleigh officials."